Growing a new prairie is a process. Many native plants take a couple years to establish so weed control is especially important during the first couple of years. Here's a look at the development over time of the Civic Center Prairie, which was established in spring 2010. 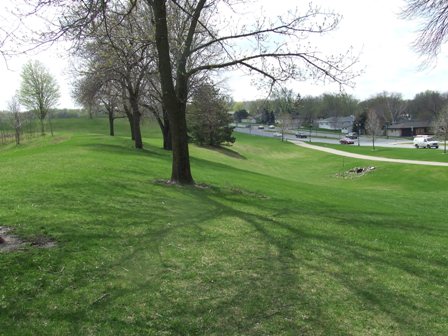 Spring 2010: Site prep
The first step in the project was to kill the turf grass with herbicide. A few weeks later, the turf grass was dead and the site was drill-seeded with native prairie plant seeds. On erosion-prone sites, drill-seeding is preferred over techniques such as till and seed. 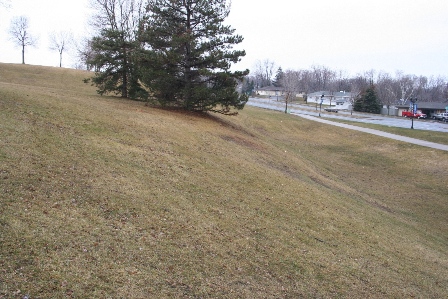 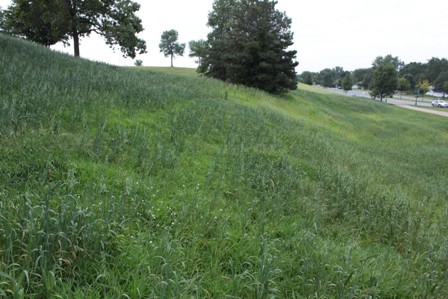 Summer 2011: One year & three months after seeding
Most newly established prairies go through a "weedy phase" where fast-growing weeds overshadow slower growing native plants. One exception is Black-Eyed Susan, a native wildflower that establishes and blooms quickly and dominated the site in summer of 2011. After a couple of years of proper management, other native plants establish and out-compete many weeds. However, aggressive weeds such as Canada Thistle and Bull Thistle were hand pulled and removed. 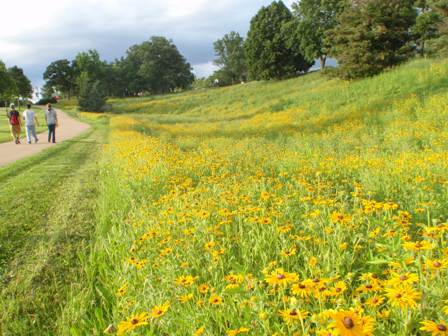 Summer 2012: Two years & three months after seeding
The slower-to-develop wildflowers began to bloom this summer. The overall diversity of blooming flowering species at the site greatly increased and different species of blooming wildflowers were present throughout the growing season. Prairie grasses, such as Indian Grass and Big Bluestem, became more visible and dominant as well. Aggressive weeds, such as Canada Thistle and Bull Thistle, were hand pulled and removed. 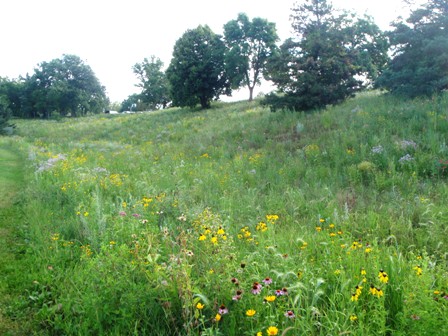 Summer 2013: Three years & three months after seeding
The diversity of blooming wildflowers continued to increase as the planting mature. There also was a major bloom of the biennial Black-Eyed Susans and Brown-Eyed Susans. More than 50 different species of native prairie grasses and wildflowers were observed at the site. A few small pockets of aggressive weeds, such as Canada Thistle and Bull Thistle, were hand pulled and removed. 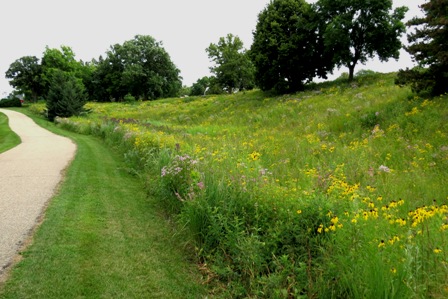 Summer 2014: Four years & three months after seeding
The prairie underwent its first controlled burn in May 2014 and responded well. Some slow growing, deep rooted prairie species were seen blooming for the first time this year, including Compass Plant (pictured above on right) and Prairie Dock. Compass Plant and Prairie Dock roots can grow down to 14 feet deep. 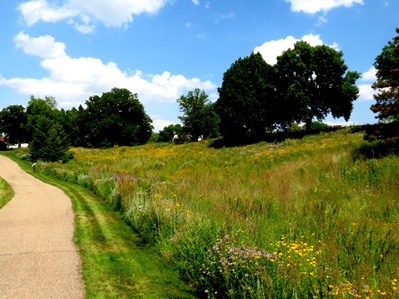 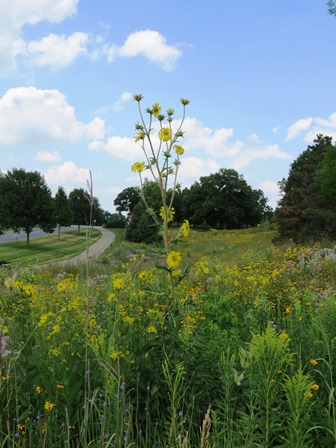